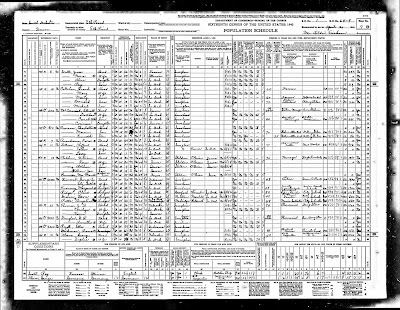 Line 51: Dorthea McCormick, wife, female, white, age 43, married, did not attend school this year, attended high school through fourth year, born in South Dakota, lived in same house in 1935, not employed for pay, did not do public emergency work, not seeking work, no employment history, homemaker, zero weeks worked in last year, no income from other sources.

Coming Up Next: The 1930 Census Extractor for Corinne Jane McCORMACK

Coming Up Soon: The Family Group of UNDERWOOD + McCORMACK

Posted by Shaking My Family Tree at 12:29 PM No comments:

Corinne lived many places in her life. Her 1940 and 1930 census locations will be coming up in future posts.

Coming Up Next: The 1940 Census Extractor for Corinne Jane McCORMACK

Coming Up Soon: The 1930 Census Extractor for Corinne Jane McCORMACK


Posted by Shaking My Family Tree at 9:04 PM No comments: 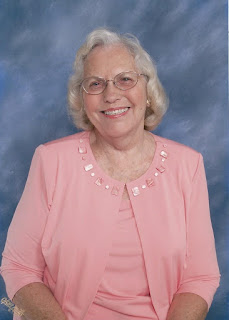 Corinne Jane (McCORMACK) UNDERWOOD was born 30 May 1927 in Sioux City, Woodbury Co., Iowa. Her family moved around during her early childhood and ended up in Elk Point, Union Co., South Dakota, which she considered her hometown. Corinne was an excellent student in the grammar and high schools in Elk Point which sparked her lifelong love of learning. A voracious reader, she really wanted to go to college, but her parents—like many people of that day—didn’t think girls needed to go to college. Her brother, Carol Hartford McCORMACK, intervened and convinced them to let her go to Chillicothe Business College in Chillicothe, Missouri, to acquire secretarial skills. After the year of business training, the two young people presented a united front and Corinne was allowed to attend Stephens College in Columbia, Boone Co., Missouri, for their two-year Associate of Arts program where she studied fashion design. Corinne thrived at Stephens and considered her time there to be one of the highlights of her life. She met her husband in Columbia on a blind double date (see the 5 February 2019 post called “Ahnentafel #2: Introducing My Father, Stephen Alexander UNDERWOOD, Jr.”) and was wooed successfully by him even though she had moved to another city upon graduation.

Corinne and Steve drove to Elk Point so Steve could meet her parents. On the way back to Columbia, they stopped in Des Moines, Polk Co., Iowa, where they were married in the chapel at St. Ambrose Cathedral. Corinne’s brother Carol and his wife Ginny were their witnesses. They all celebrated with a post-wedding dinner in the red leather booths at Babe’s Restaurant and Nightclub afterwards.

Corinne and Steve reared five children together. She was a stay-at-home mother as was the accepted tradition during the 1950s and 1960s. When her last child (me) graduated high school in 1979, Corinne went back to college. She studied English at the University of Missouri – Kansas City and earned both her B.A. and M.A. degrees from that fine institution. During her time there she began writing poetry and was published many times, earning awards for her writing. After graduating with her Master’s degree, Corinne began teaching English at Johnson County Community College in Overland Park, Johnson Co., Kansas. She really enjoyed her teaching career and found much fulfillment from it.

Corinne had always had a bad case of wanderlust and luckily married someone else who also loved to travel. She and Steve took their children on many vacations through the years, piling all five kids, her mother, and her mother’s dog into the car. We used to joke that we looked like the Joads from The Grapes of Wrath—Steve, eldest son Pat, and Corinne would be in the front bench seat; middle son Greg and youngest son Doug would be stuffed into the wheel wells of the big sedan to nap; elder daughter Kathy and Corinne’s mother Inger Dorthea (STAPP) McCORMACK and Nana’s dog Tammy, a Pomeranian, would sit on the back seat; I would be laid out to broil on the back ledge!

Steve encouraged Corinne to begin traveling the world in 1991. She went on a 6-week tour of Europe and was on the last tour bus going through Yugoslavia before war broke out. Her travel bug bit hard, and she traveled the world, going to six of the seven continents. I told her she could count all seven: Mom was on the tarmac at the tip of South America, waiting to fly to Antarctica when the cruise line cancelled due to bad weather. She never agreed, though, that she could count that seventh continent.

After she was widowed in March 1993, Corinne continued to travel, sometimes alone, sometimes with her friend Maxine Moore (her former English professor at UMKC), and sometimes with a group. She and I took many trips together, too. We had a deal: Mom was capital, and I was labor. She collected souvenir spoons from all the countries she visited and had well over a hundred of them once you counted a spoon for each of the 50 states. Well, 49. Corinne would never visit North Dakota. Remembering the brutal blizzards of her childhood in South Dakota, she always said, “Why would I ever go to someplace called North Dakota?”

Corinne became ill in her 80s. She suffered a massive heart attack in 2001 and had major open-heart surgery a couple of months later. Whenever we visited a new physician and told him how much was done during that surgery, the doctor would look incredulous. Two months later, she underwent lung surgery. Two months after that, Corinne was diagnosed with thyroid cancer, had surgery to remove her thyroid, and underwent radiation. She never complained about her illnesses and I only saw her cry once. Mom reminded me of one of those inflatable clown dolls that were weighted on the bottom: whenever you punched it in the nose, the doll would swing to the floor and then swing right back up. She was the Weebles of resilience. She may have wobbled, but she never fell down. Being Mom’s long-time caregiver was the best thing I ever did in my life. I got to witness firsthand an amazing courage that I wish to aspire to but fear I never will achieve.

Corinne traveled until the day she died. Mom and I were on a cruise in the Inside Passage of Alaska when I awoke on 14 August 2014 to find that she had passed away during the night. She has two death certificates: one from the doctor aboard the cruise ship and one from the officials in Juneau where we docked that morning. She would have loved that her death cert says that she died “at sea.” Corinne died doing something she loved with someone who loved her dearly. I miss her every day.

Coming Up Next: The 1950-2010 Census Predictor for Corinne Jane McCORMACK

Coming Up Soon: The 1940 Census Extractor for Corinne Jane McCORMACK


Posted by Shaking My Family Tree at 9:18 AM No comments: